There used to be people who created worlds for fun.

Thousands of other worlds, millions maybe. Sculptures the size of moons. Worlds full of mysteries to explore, traps to outsmart, riches to mine. It was a game to them. When a 'Crafter wanted a house in the mountains, she'd throw down some mountains and build the house on top. That's how it was in the old days.

The Worldcrafters are gone, obviously. Faded into legend. We've ground this world to dust and we won't hear talk of others. But I know they existed, because I found something they left behind.

See, every one of the worlds they created has an entry point. A way to get from our world to the other one. Some time between then and now, all them entry points got mixed up, pushed into our world, overlapping and bubbling across space like a wave on the shore. It's called the Reef. I heard about it when I was your age, and just last year I found it.

The Reef is a catalogue of worlds. I found signs in there, signs that tell the rules of a world, or say who made it. There's even books scattered about, books with codes that would tell us how to enter a world for real, if we still had the technology. But I'm not going there for books. The Reef is full of ancient technology, magical artifacts, wealth beyond anything you've ever imagined. Way beyond what you're scraping out of this starving little planet.

Do you know pumpkins? Yes, the orange things. Pumpkin pie, jack-o-lanterns. You ever see a pumpkin before a year ago? Pumpkins were fairy tale stuff. Now they're everywhere. You know why? Because a year ago, I found the Reef and I brought back four pumpkin seeds.

Four seeds was all I could take, but now I'm looking to go back. I know where the Reef is. I can get us there. I just need someone who can carry a pick and swing a sword. I'm not afraid of the Worldcrafters! They're long gone. But there are... things still living on the Reef, and not all of them got there from this world.

So, what'll it be, kid? Do you want to mine a panned-out vein of redstone all your life, or do you want to have an adventure?

You can use the Reef worlds for any noncommercial purpose. The worlds are made entirely out of chunks created by others, so I don't feel like I have any right to put major restrictions on them. 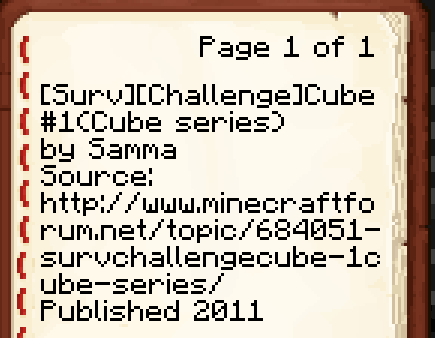 The Reef is a series of Minecraft worlds created to demonstrate the capabilities of the Minecraft Geologic Survey. A Reef world is made by combining chunks from thousands of survival-mode Minecraft worlds, to create a more-or-less contiguous surface that is itself playable in survival mode.

The Reef was created by Leonard Richardson, with significant help from Joe Hills.

Lapis Lauri and Ron Smalec race to the end of the Timeline:

"Explore a thousand worlds at once with a new Minecraft art project" (The A.V. Club, September 10 2014)

Most of the actual worlds were downloaded from MediaFire and DropBox.

The full archive is about two terabytes in size, and includes worlds, screenshots, mods, texture packs, and skins. The Minecraft Geologic Survey exists to give a sample of the most interesting bits of the dataset, in a package that's small enough to reasonably distribute over the Internet.

You can download the Minecraft Geologic Survey from the Internet Archive.

The survey includes the following information for each world in the archive:

For detailed information, and to download the MCGS dataset, see the README file.